I have been involved in many different sorts of anti-corruption efforts since 1985. First  as an oil industry executive for Shell in West Africa and in China, then leading a civil society programme tackling military and security corruption with Transparency International, then as an International Commissioner on anti-corruption in Afghanistan; and now as the founder of a large website on practical ways for reform-minded individuals to tackle corruption.

My personal involvement almost parallels the timeline of the modern anti-corruption movement. That started with the US Financial Corrupt Practices Act of 1978/1986, the founding of Transparency International in 1993, the conversion of the World Bank to the importance of corruption in 1996, the OECD Anti-Bribery Convention in 1999, the UN Convention Against Corruption in 2003, and onwards from there with a multiplicity of new laws, new international initiatives and the professionalisation of compliance.

So, what have I learnt regarding corruption? Corruption really does matter…it destroys lives, it impoverishes people, it inhibits wealth-generation and hurts law-abiding communities. It is an evil that is rejected by all the faiths of the world. Yet not only does it persist, but it has been tolerated by too many communities for too long. Corruption is not ‘just’ a development issue. It is as bad in developed countries, just different. We saw this  when Iceland, a supposedly super-clean country, collapsed in the financial crisis of 2008 as the corrupt links between the members of the Icelandic elite led to the whole economy shattering. We see it today in the design of corrupt structures and the laundering of the benefits of corruption in global; hubs like London.

At a personal level, it matters to me – I am emotionally upset by the injustice of corruption, to individuals, to communities and to societies. At the same time, I am gratified to find that this is a subject where my particular mix of knowledge and experience seems to be useful in making sense of a complex phenomenon.

What to do and where to start – my perspective

After many years of thinking about this – and, sadly, growing older – I think the best place to start about corruption is with the components of my own ‘mental model’. I make no claim that these form a coherent whole, nor that they could be the ‘only truth’. But, as much change management research has shown, we each carry deeply held assumptions about how we think the world works, which operate almost below the level of logical argument. So, rather than ‘explain’ the rationale of what I think, here are what I think of as the ten core elements. You can see the thinking behind each assertion by clicking on the + buuttton.

1. Corruption is one form of abuse of power, and is therefore fundamentally about injustice

It’s not the only form of injustice, so too are cruelty, poverty and sexual abuse, for example, but this is where I start. Not with logical definitions, like the classic one of corruption being the abuse of authority for personal gain, but at that point that we feel outrage as human beings. This is what drives us, or at least me. For an excellent argument how and why injustice is the core of corruption, see Rothstein and Varrach, 2017, eg p52.

2. Corruption needs to be disaggregated for reforms to be effective. I believe that Sectors should be the first level of disaggregation, and the specific types of abuse within the sector should be the second level

In order to be capable of being tackled, you have to break corruption down to one or two or three lower levels of classification. As Rothstein and Varraich put it ‘Biologists classify humming birds, hens, eagles and ostriches all as ‘birds’ despite the fact that they are, to say the least, quite different ‘birds’. (ibid, p45).

In the same way, I believe that the first level of disaggregation should be ‘sector’ (health, education, construction, fisheries, etc) and below that each sector has 20-50 different specific corruption types.  At sector level, like in  health, construction or water, you can be specific about the detailed types of corruption. You can integrate both public and private sector action, and you can address the political context more realistically. There is more ownership and pride from those working in the sector. Sector-level initiatives are more feasible, whether small, such as within a department, or large, such as across the Ministry or an agency. Even in the toughest corruption environments, where progress may only be possible in tiny steps, there are many sector improvement measures that can help, and which can form the basis of a much larger improvement when circumstances change.For example, the various pharmaceutical-related corruption types within health, or the ways that telecom licenses are corruptly granted. Even when a corruption type is common across sectors, such as the corrupt diversion of salaries from the ministry to the worker, the ways that this happens and the ways that it can be stopped are different from one sector to another.

Merits of sectors: A sector typology gets us away from binary types – Grand/petty, need/greed, political/ bureaucratic, institutional/individual all vanish: all types are in the one typology. A sector approach integrates pubic sector reform and private sector reform. In every sector, the public sector and the private sector are deeply intertwined; whether as integration of contractors, outsourcing of support roles, complete privatisation of previously government tasks. Political context differs markedly between sectors. It is usually not nationally homogenous. Incentives: Understanding and changing the ‘rules of the game’ happens within sectors.

You will always find professionally credible champions within sectors to articulate/drive change. The corruption differences between individual sectors within any one country are large and often bigger than the differences in corruption between countries.  Sector knowledge also transcends national boundaries: medical staff in one country may well have knowledge that is helpful in another; and transnational initiatives to solve sector-specific corruption problems now exist, such as in education, in mineral extraction, in defence and in shipping.

3. There have been enough success stories around the world for us to be confident that corruption can be reduced to the level of an exception rather than the norm

Enough countries have made progress against corruption, it seems to me, for this to be ‘obvious’. Countries such as Botswana, Chile, Uruguay, Georgia, Estonia, Lithuania, the Nordics, Singapore and Hong Kong. The ‘Anticorpp’ research led by Professor Mungui Pippidi goes into immense detail on the how, why and the process.

4. Most people who are engaged in corruption are caught up in systems that are not of their making. Many, if not most of them are ready to implement anti-corruption measures

This was a core insight from my years of working with senior military in numerous defence forces. Many of the officers were corrupted, well aware that colluding in a corrupt system was the only way to advance. But this did not stop their readiness to enact reforms. It only stopped their readiness to take actions that might endanger or impoverish themselves or their family. The readiness of groups that are largely corrupt to take reform action is a critical insight for catalysing change.

5. Reform actions at whole-of-government level are important, but they carry a high risk of failure. They are also insufficient

Such large scale reforms, eg to the civil service, to the judicial system, to national cultures are undoubtedly part of the ‘mix’ of reforms and therefor necessary. BUT, due to complexity, to the lack of anyone who owns the whole change, etc…they carry a very high risk of failure.

6. All reforms, whether successful or not, will be accompanied by an unchanging, continuing level of anger and complaint about ongoing corruption

This is normal and needs to be anticipated.text text text

7. Sector-specific corruption reform - eg in health, or education, or agriculture - has been underemphasised over the last 25 years. Each sector needs sector-specific expertise, advocacy and monitoring, which is largely lacking today

8. We need to give more agency and support to the people who have to own the change - usually senior Ministry officials, Ministers and companies in the sector

9. Stop 'admiring the problem' of corruption. Put the majority of effort into fixing it and into analysing what seems to work

Put 90% of the focus on fixing the problem instead. Academics, multilateral..they all know its much easier to analyse the problem than it is to develop and sustain solutions. (more). I know there is a genuine issue of needing to carefully and thoroughly identify the nature of the problem, but this has been taken to ridiculous extremes in the A-C community.

10. Anti-corruption strategies - whether sectoral, national, sub-national or international - are still in a very early stage of evolution. 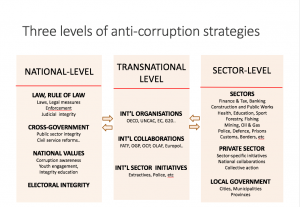 Lessons from working in Afghanistan

From 2015 through 2017, I was one of three International Committee Members on the Afghanistan independent Anti-Corruption Monitoring and Evaluation Committee. Established by the President of Afghanistan, the Committee – known as the ‘MEC’ – comprises 6 people, three well-respected Afghans and three internationally known anti-corruption experts, supported by a supporting secretariat of 25 professionals in Kabul. They monitor what is going right and wrong in anti-corruption efforts in the country, carry out detailed analyses of the corruption issues, and press for change. More detail on MEC can be found here.

Here are the things that I learnt:

From 2004 to 2015, I founded and then led the global Defence and Security programme at the NGO Transparency International. This large, ground-breaking programme works on tackling the ways that corruption undermines security and military forces in countries. I led the team’s field work in over 30 countries, including Afghanistan, Bulgaria, Burundi, Colombia, Georgia, Kenya, Latvia, Lebanon, Norway, Palestine, Poland, Saudi Arabia, Serbia, South Korea, Taiwan, Turkey, Uganda, Ukraine, UK and the USA. This work was instrumental in shaping the United Nations Arms Trade Treaty (2013), in influencing NATO policy and operations in respect of counter-corruption, in shaping the military doctrine of several countries, and in policy forums such as the Munich Security Conference.

Here is what I learnt:

1. Military officers can be in a deeply corrupt system but still keen for reform

I was struck how senior officials and senior officers were open about their participation in corrupt or questionable practice. They knew very well the political constraints on what they could do, but many were nonetheless taking small actions to reduce the corruption.  Their question, almost every time, was What do you suggest I could best do, and where do I find the necessary knowledge? For many, finding that defence-specific anti-corruption knowledge existed was like finding water in the desert.

2. Defence is impenetrable unless you can speak the jargon and have a credible colleague

3. Pride is a powerful motivator of reform

Officers all over the world receive similar training in integrity (The core officer training for most national militaries is historically modelled on one system, that from Sandhurst Military Academy in the UK). The purpose of the training is not so much against corruption, rather it is the integrity needed for soldiers to follow the officers into battle, perhaps to die. Nevertheless, officers know how deeply corruption goes against the ethos of military leadership, and many are ashamed of the situation in their military and are ready to take actions to change it.

I pioneered detailed, comparative analyses of the defence corruption risks of some 130 countries (more to come).

Though our work was largely focused on militaries and Defence Ministries, we were also engaged in corruption reform in police services in Afghanistan, Burundi, Palestine, Ukraine and the UK. This subject has been the subject of many national Commissions in anglophone countries, notably USA, UK and Australia, by a few groups, notable DCAF in Switzerland, and by a few academics. But, relative to its size and importance.

Shell prides itself on its business principles, including non-involvement in corruption, and I was on the ‘front line’ of this issue in most of these jobs. Here’s what I learnt in relation to corruption:

Connect with me on LinkedIn